After the Waste Oil Recovery Centrifuge was launched, most customers have given positive feedback, believing that this type of product meets their expectations for high-quality products.Moreover,customization service is offered to meet different demands.
SEND INQUIRY NOW

Product Description
Waste Oil Recovery Centrifuge
Waste oil is produced in petroleum in oil production, pipeline transportation, oil-gas combined stations, oil refineries, and oily wastewater.
Waste oil treatment is a complete set of production process, using the principle of centrifugal separation and oxidation of demulsification. Its main equipment is composed of dosing system, feeding system, separation system, conveying system, and control system.
After the waste oil is collected and heated by steam, a suitable number of additives like demulsifier and active agent are added in it, make the emulsified oily water become liquid.
A high-efficiency three-phase used oil centrifuge is adopted to realize the continuous separation of oil, water, and slag in the oily sludge.
The separated water and oil-water mixture which is not demulsified are directly sent to the sewage treatment system, and a two-phase waste oil centrifuge with high efficiency is used for dehydration.
The crude oil residue in the dehydrated slag phase can be recovered by the combustion or thermal desorption process. The separated crude oil is collected and then purified by a three-phase disc separator. The purified oil can be reused.
The waste oil centrifuge can also handle the oily (waste) water produced during processing crude oil. It is used to treated by rough flocculation + dehydration. The slag phase is directly incinerated after dehydration.
This treatment mode causes a lot of waste of crude oil resources. Now we can apply a series of pretreatment processes (adding demulsifier, surfactant, etc.) and use the high-efficiency three-phase waste oil centrifuge to realize the reuse of crude oilresources.
After the oily (waste) water is collected, add a suitable amount of demulsifier and an active agent., the oily water in the emulsified state turn into liquid, and the oily (waste) water after demulsification is naturally settled and separated in an oil trap.
The water and the oil-water mixture which is not demulsified in the middle layer of the oil trap are directly sent to the sewage treatment system for treatment.
A high efficiency two-phase waste oil centrifuge is used for dehydration. The oil floating on the upper layer of the oil trap and the sludge settled on the bottom layer are collected and sent into the stirring tank for further treatment.
The oil, water, and slag in the oily sludge treated can be separated continuously from each other through the high-efficiency three-phase used oil centrifuge.
The waste oil centrifuge can also used for drilling oil based mud. Its basic composition is oil, water, organic clay, and oil-soluble chemical treatment agent. OBM resists high temperature and calcium salt erosion, which is beneficial to the stability and lubrication of the well wall.
The mud has good lubrication and small damage to oil and gas layers, so it is widely used in drilling platforms. However, the slag generated in the equipment of drilling solid control system (vibrating screen, centrifuge, and dryer) has seriously affected the environmental safety and must be treated in a harmless manner. After treatment, the oil content of the slag is less than 1% and the oil is further purified and reused.
The collected drilling OBM wastewater is subjected to high-speed stirring in proportion, add a suitable amount of demulsifier, active agent, and other additives, makes the oily water in the emulsified state become liquid.
The vibrating screen is used before separation to remove large particles of soil, sand, glass bottles, mineral water bottles, convenient bags, gauze, and other solid wastes, and then the high-efficiency two-phase waste oil centrifuge is adopted to separate oil, water and slag continuously.
After heated by steam, the separated liquid phase enters the sedimentation tank, in which the supernatant is removed, and the liquid phase settled at the bottom mixed with the slag phase separated by the centrifuge. The residual oil is recovered by the thermal desorption process.

During processing of tar in coking plants, decanters separate the solid impurities out of the raw tar. The cleaned tar contains less than 0.3% quinolin. The separated solid has a total dry solids of approx. 33 - 40% and its consistency is between clumpy and almost solid.
In the processing of drilling slurry, drilling emulsion and drilling muds, all substances that have entered the emulsion during the drilling process are separated out. While the riddle screens and hydrocyclones separate coarse-grained particles, the decanter deals with the small particles.

In mining, decanters can be used in numerous applications involving processing minerals and ores. 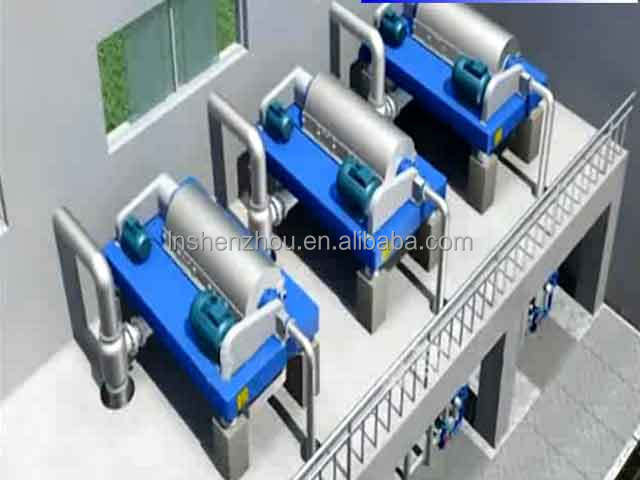 Copper mining process and recovery of organic from copper crud
Acids are commonly used to extract the metal from the ore in a production process called leaching. The pregnant leach solution (PLS) is sent to the solvent extraction (SX) plant where in high intensity mixers, the PLS comes into contact with an organic extractant dissolved in an organic diluent. This mixture is referred simply as the organic. The metal ions migrate from the aqueous phase into the organic phase. This procedure is called solvent extraction. The solution flows from the mixers into settlers, where the organic phase is separated from the aqueous phase. Some of the impurities in the system build up in the settlers in the form of crud. This can occur at the surface of the organic phase, between the aqueous and organic phases, as well as at the bottom of the settlers. This crud can be a mixture of wind-blown dust, solids from leaching, impurities in plantsolutions, or insects.
If the crud is allowed to build up in the settlers it may start moving into the next mixing stage. This can rapidly cause a ‘crudrun’ resulting in severely increased entrainment. This, in turn, causes contamination of electrolytes with the leach solution and organic phase.
If the crud is allowed to remain in the settler, the settler has to eventually be taken offline to be cleaned. This leads to downtime and high maintenance costs. Crud is therefore regularly removed from the settlers, usually on a daily basis.
Operators vacuum the crud layer off and store it in a tank. From this tank, the crud is pumped into the SHENZHOU Tricanter which separates the crud into four phases: the organic phase, the aqueous phase, the solids phase, and the fourth phase. The fourth phase builds up at the organic aqueous interface. By adjusting the variable impeller of the Tricanter correctly, the operator can ensure that this portion of ultra-fine solids is discharged as part of the aqueous phase. The dewatered solids are taken away for disposal or burning. The organic phase can be used again in the SX process, and the aqueous phase flows to the neutralization tank.

Shenzhou centrifuges for the mining industry: a perfect match 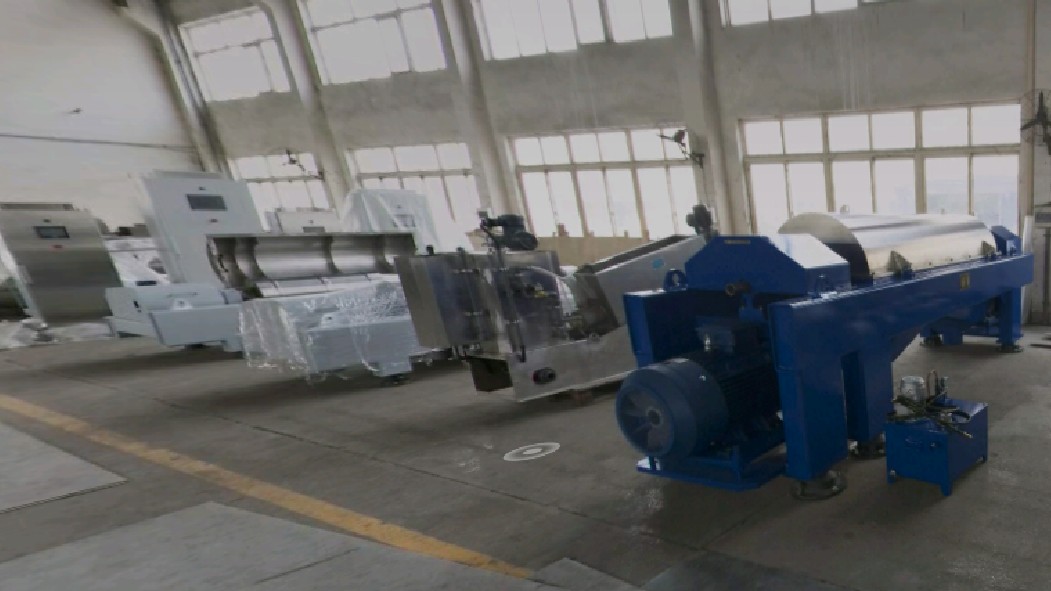 When centrifuge works,there is no obvious first-order and two-order resonance regions within designed speed range,meanwhile ,whole vibration intensity of bearing seat is definited within 2mm/s-4mm/s.All of this eliminates extra fatigue damage to components and assembly units from high frequency vibration during operation and sudden vibration when shut down.

We use origin bearings of international first-line brands such as SKF,FAG and so on.

All fashioning components and assembly units are detected in constant temperature condition,to make sure of actual processing quality meets the requirements of designed precision accuracy.

Whole machine physical design and processing technique adopted in critical position,ensure all assembly units and bowls of the same centrifuge model interchangeable.It is not only easy to maintain ,but also greatly improve the reliability and safety of equipment. 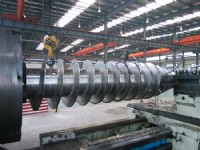 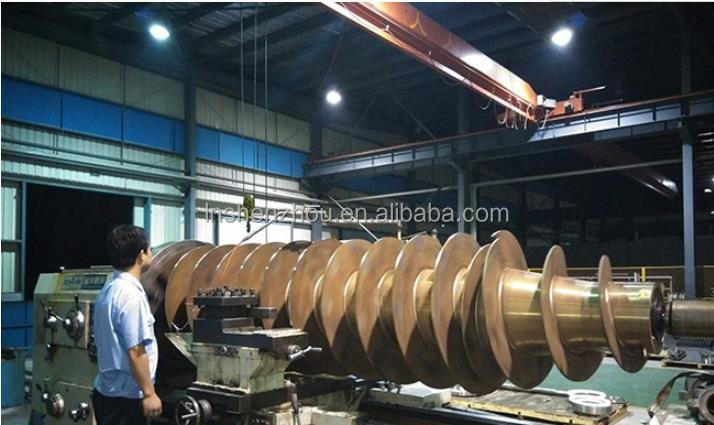 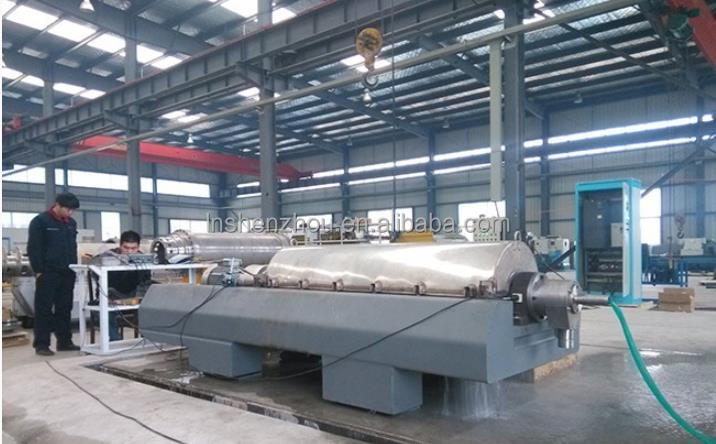 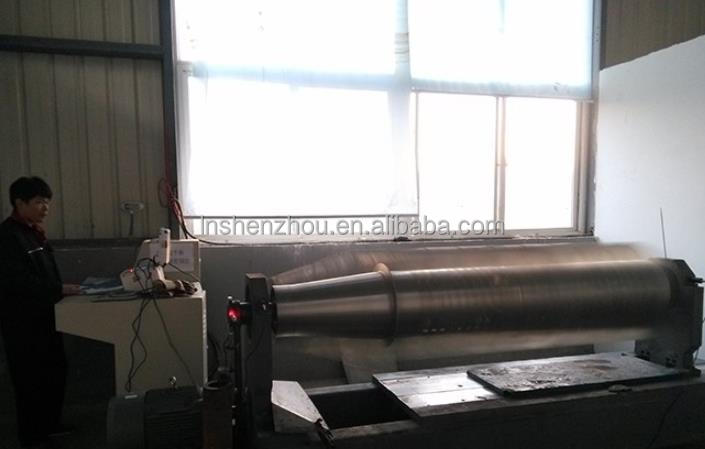 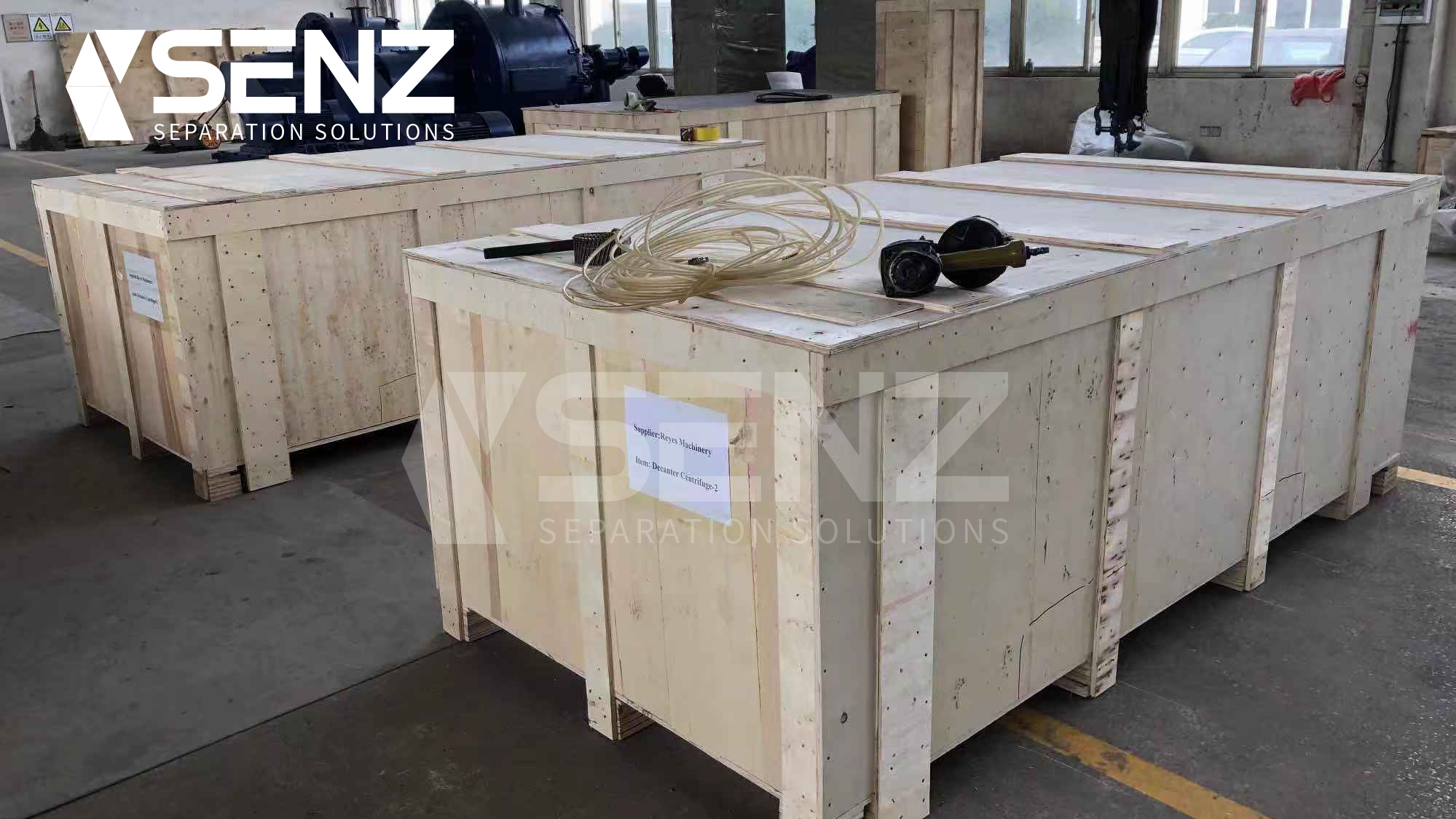 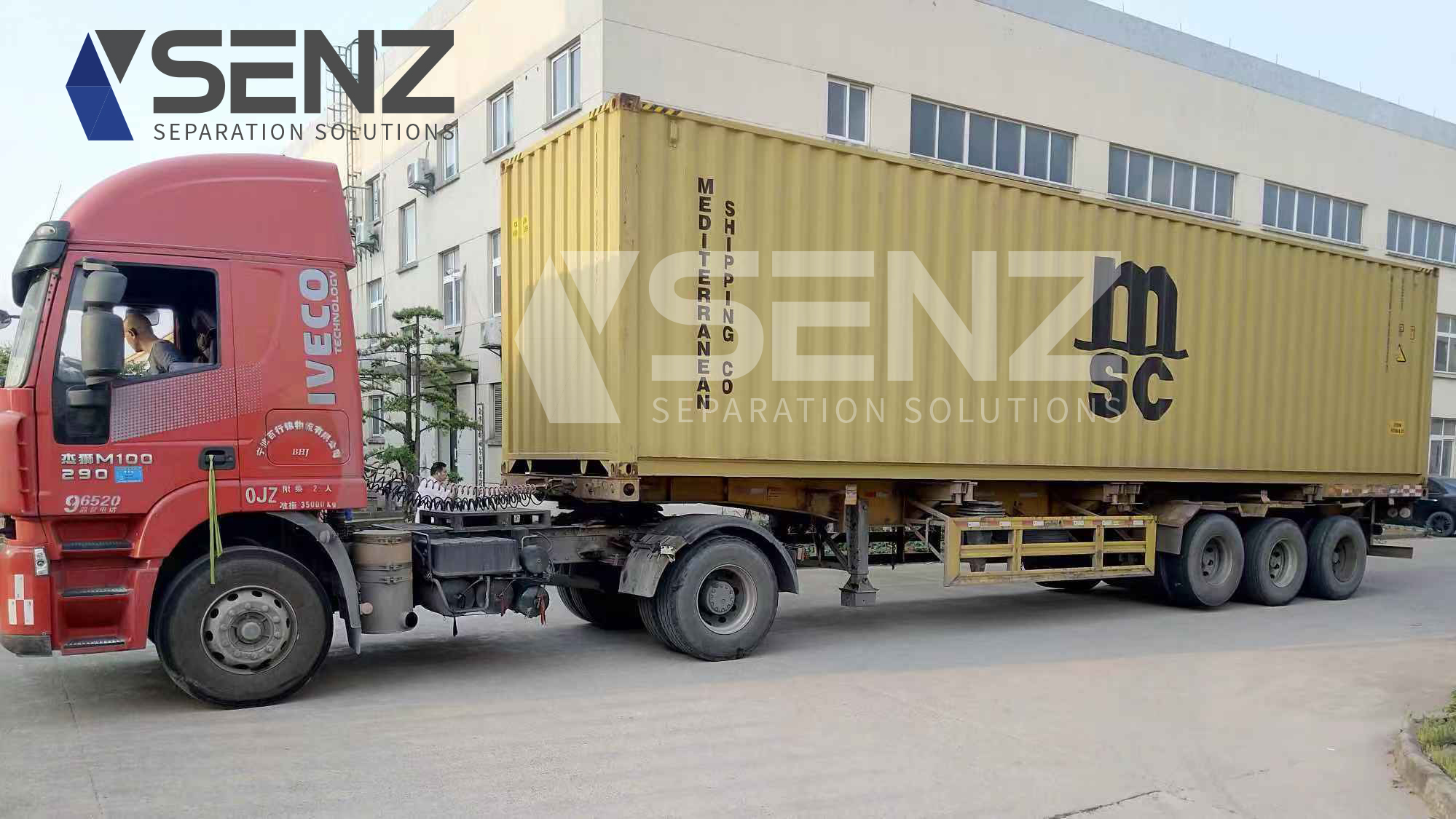 To better ensure the safety of your goods, professional, environmentally friendly, convenient and efficient packaging services will be provided.
FAQ
Q1.What's your advantage? Why we choose you?
A:1) More than 50 years experience of centrifuge & separator production and R&D.We have the most professional techniques and team. More advantage in price
2)Great production capacity Sustainable Supply . According to customer requirements, We support the customized include package.
3)We use famouse good quality materials and the best production process

Q2.What's the Payment?
A:T/T would be better with quick transfer and few bank fees. LC could also be accept, but the
procedure is complex and the fee is high. You can also use Western Union and Paypal.

Q3.Are you a factory or trading company?
A:We are a professional manufacturer. We are warmly welcome clients from worldwide to visit our factory and cooperate with us.

Q4.How long is the warranty period ?
A:12 months.
Certificates 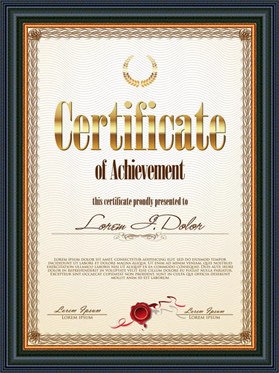 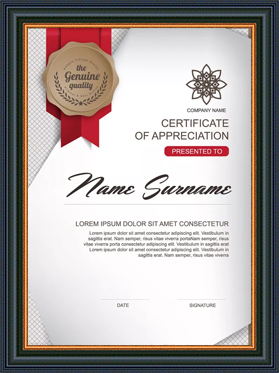 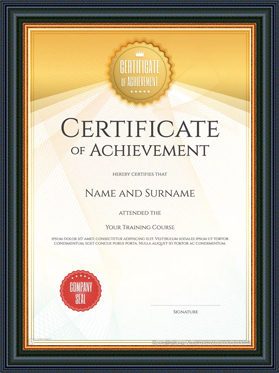 Welcome all who care engaged in the separation and filtration to work with us,and we are also looking for the qualified world wide agents to provide better service and deep marketing.